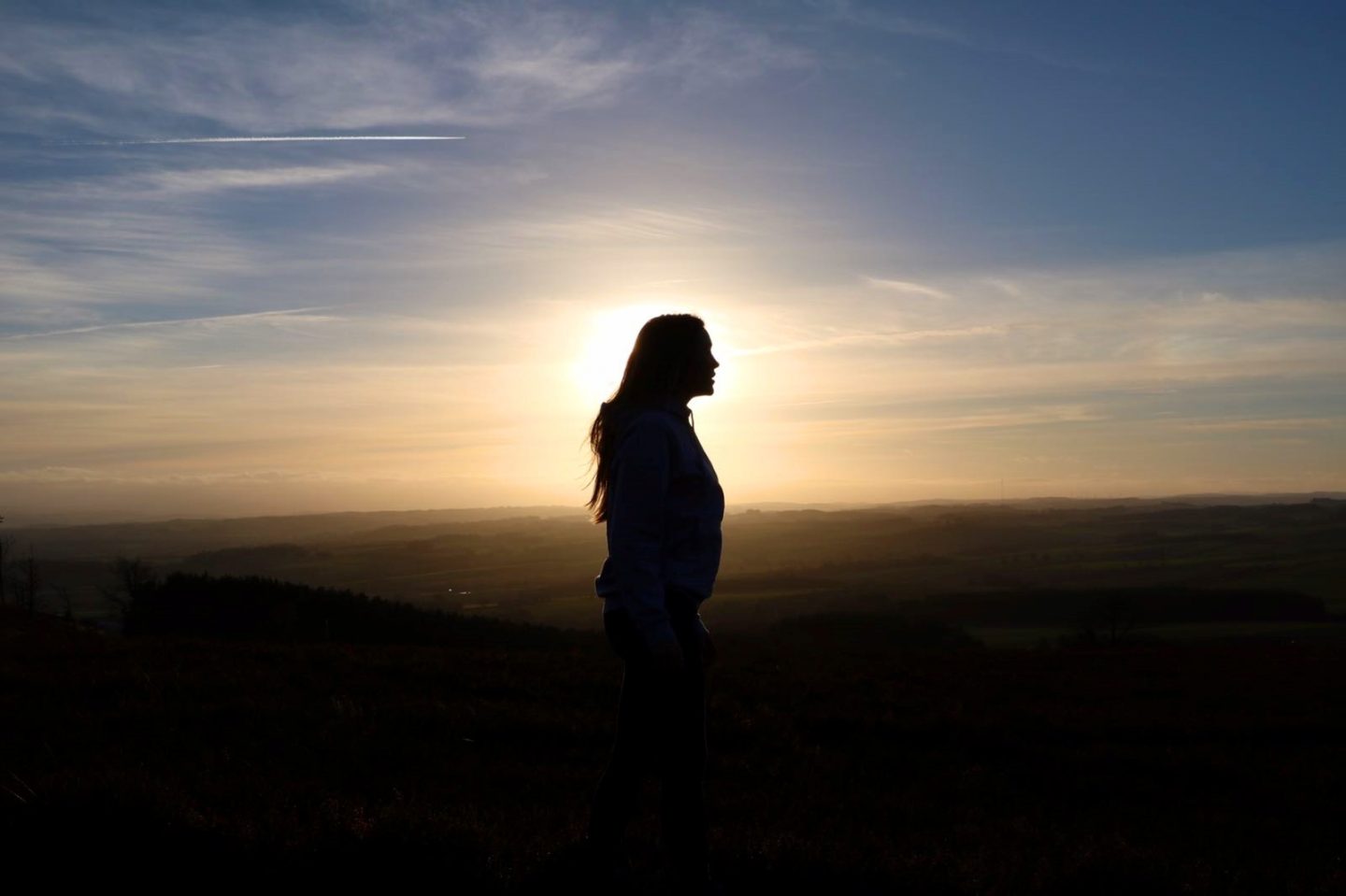 I was born with a full head of hair… full on Dennis-the-Menace baby. Then, from the moment it began growing, I kept it long, once with a fringe (though that look has not since been repeated…), but always, always long. 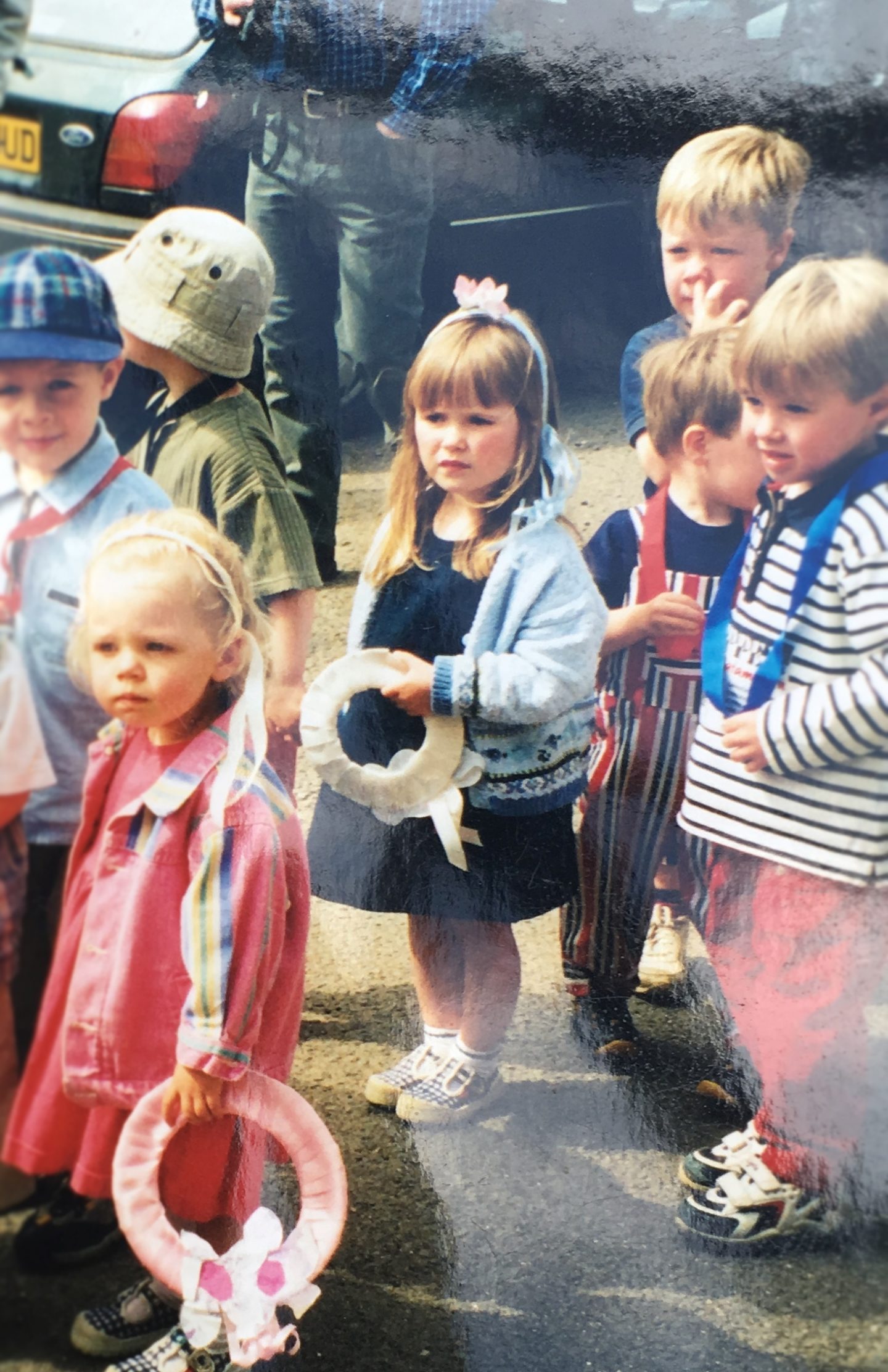 I mean, I have no idea who the boy picking his nose is, but I apologise to him.

My hair has always been a part of me, I mean, obviously. But also a part of who I am. Along with the growth of my mane came my lifelong habit of ‘twiddling’. By this I mean the art of twirling my hair, a routine that has on occasion led to awkward accusations of flirting. In latter years this ‘twiddling’ developed and I mastered the art of knots: of tying strands of my hair into a series of knots with one hand (a little like that weird ability to tie a knot in a cherry stalk with your tongue.) None of this was ever in the endeavour of flirtation, however. ‘Twiddling’ and knot-tying was a comfort, a sub-conscious attempt to remain calm. Exams were a key location: people have frequently told me they can tell how bad or okay my exam is going by the pace or erratic nature of my hair activity. Playing with my hair was just something to keep my left hand occupied in lectures, when reading, or thinking… it was a part of my character perhaps. Anyway… I no longer have this ability. 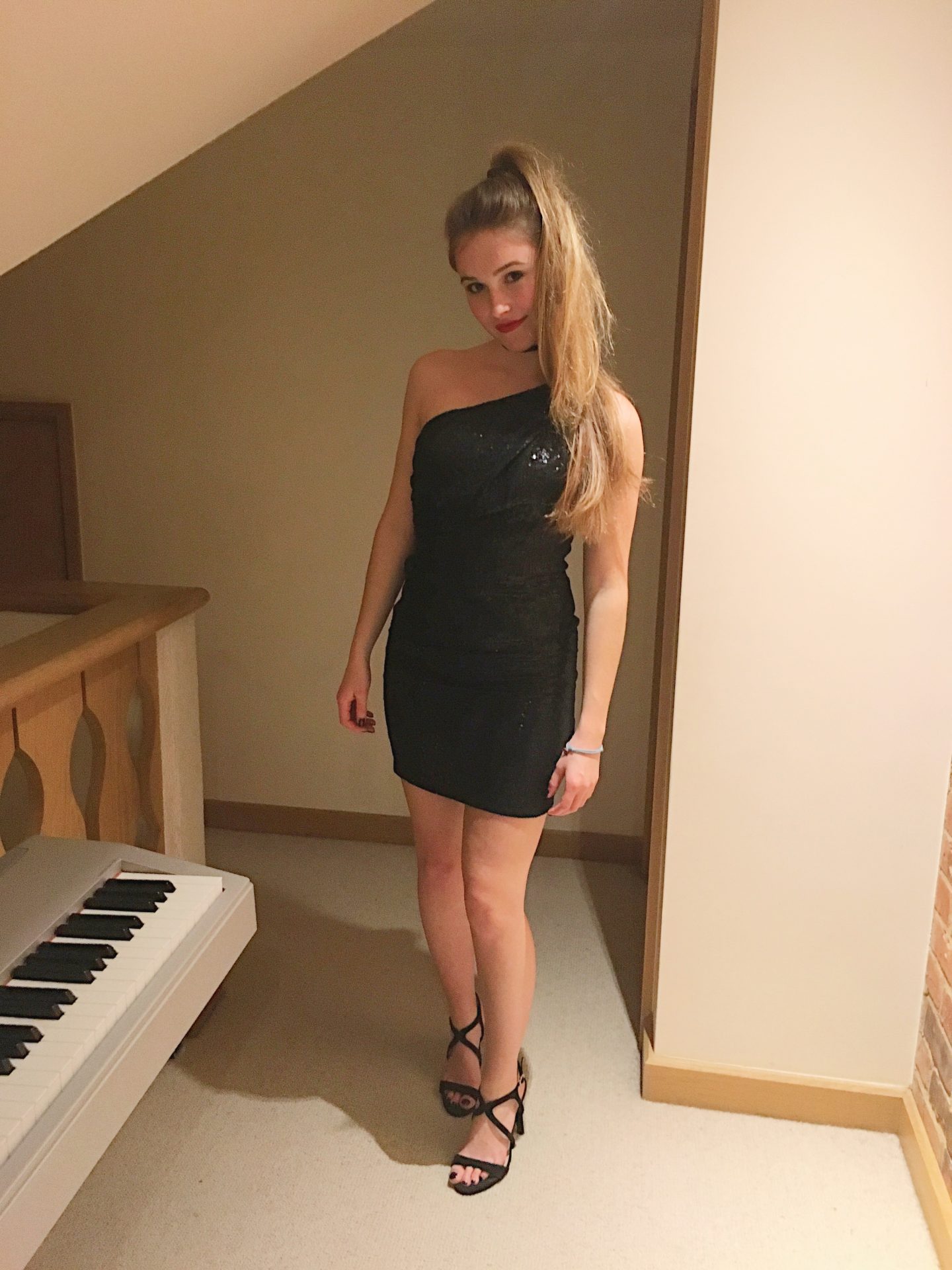 It really got too long at the end.

In July of last year one of my oldest friends sadly lost the battle with cancer, it must be noted that she put up an extraordinary fight and one that we were all able to follow in awe as she blogged her way through it. Her writing is a profound mix of wit, optimism, and brutality, it can be described no less than inspiring. I would intently urge you to have a read here. She has since received a posthumous national award for her charitable work for Anthony Nolan who supported her along her journey. Many of her friends and family have continued running brilliant events for Anthony Nolan in her memory. I felt like I wanted to do something too, and remembered how the Little Princess Trust had also helped her. 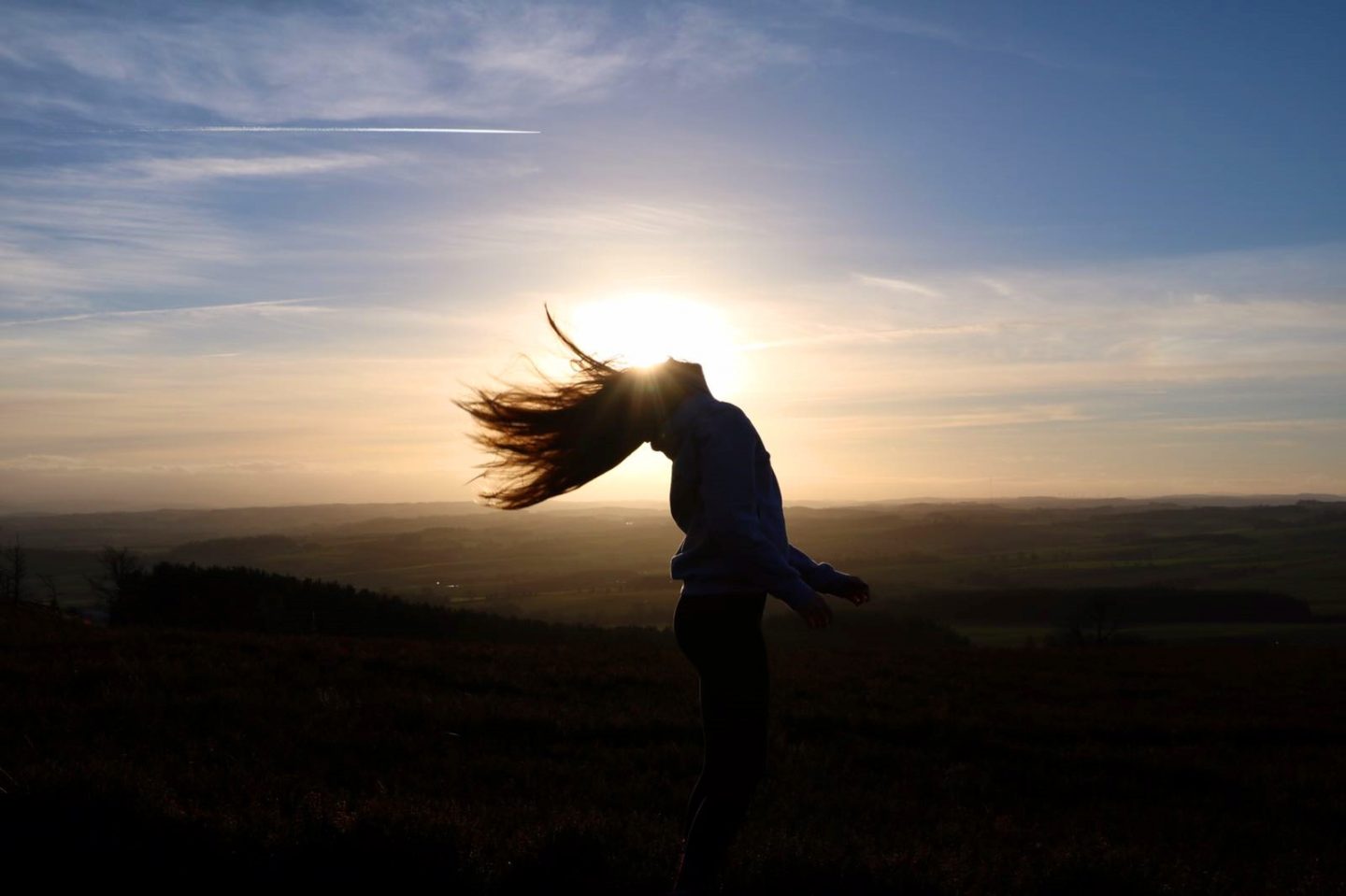 The Little Princess Trust is a charity which makes beautiful wigs, out of real human hair, for children and young adults who have lost theirs to illness. They rely on hair donations from the public, exceeding the length of 30 cm (so quite long). Suddenly I saw what I could do… my hair, on deciding, was about 35cm anyway, but would require I bit more growth so that I wouldn’t be left with nothing when I cut it off. (Jessie J could get away with it because shes famous and has a beautiful face!) Fortunately, my hair seems to grow at record pace so by the beginning of this year it was the perfect length. It was also hideously heavy so had no volume and took about 4 hours to dry every time… exhausting and unnecessarily high maintenance. It was time to change, I was excited rather than anxious. 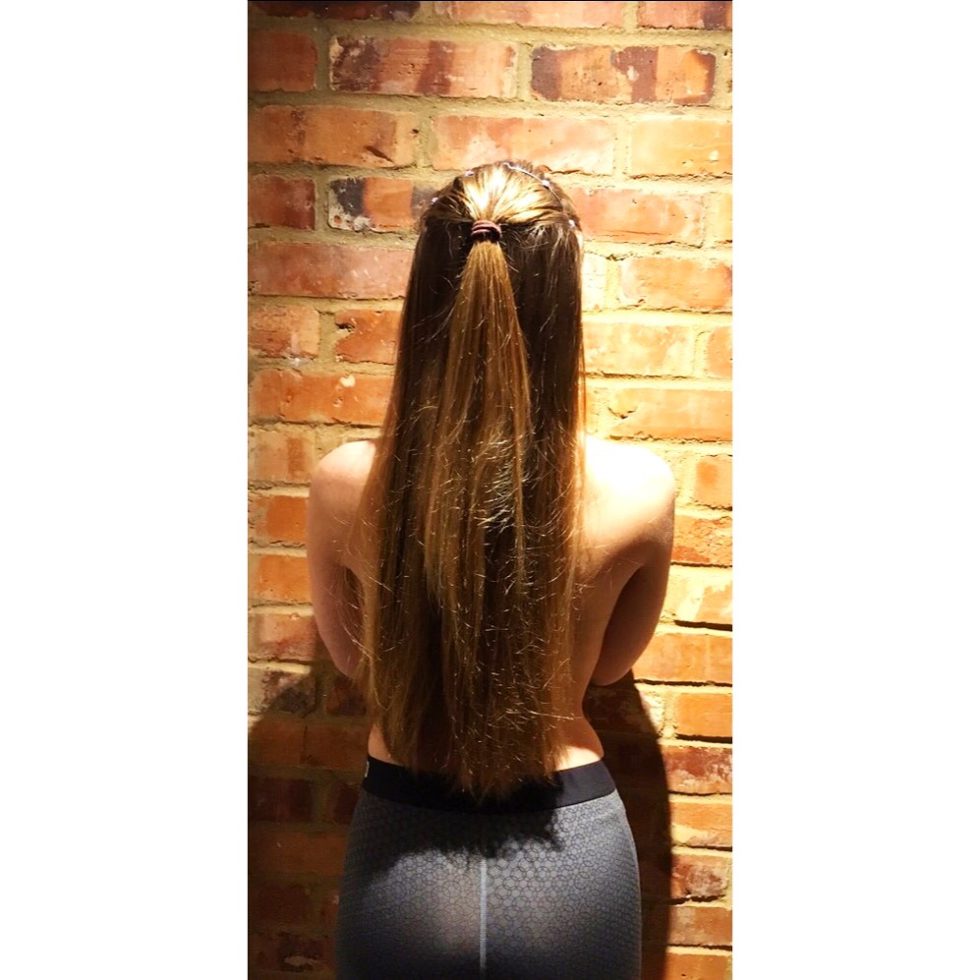 So I began twiddling like my life depended on it, knowing that time would soon run out for my comforting habit. I also began promoting my big hair cut on social media (apologies for the bombardments ever since.) My reasoning for this was that a wig costs on average £350-£500 to produce… so I felt that sending my hair alone wasn’t enough.

Somehow, perhaps because everyone knows I’ve ALWAYS had my hair super long, and understand it was a ‘part of me’, my JustGiving page began to build. Friends and family donated hugely generously and I watched in awe as my total kept rising past the targets I set. (It may also be a case of people thinking I was completely shaving my head, so I’m hugely sorry if I’ve disappointed anyone there…!) I had hoped to raise £350, but figured this was quite ambitious considering I was only cutting my hair, not running a marathon or something truly extraordinary. 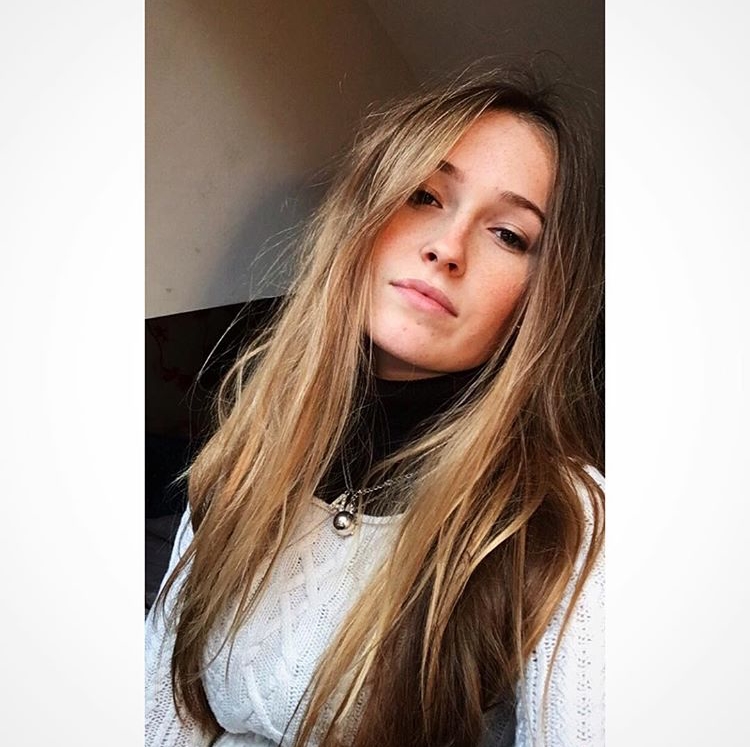 Anyway, the total kept rising and (I honestly cannot believe this), it has now reached a whopping £950!!!!!!!!!!!!!!!! I am SO grateful to all of you who have donated, The Little Princess Trust can now afford to make two wigs out of this; that’s two children whose circumstances can be made that little bit brighter. 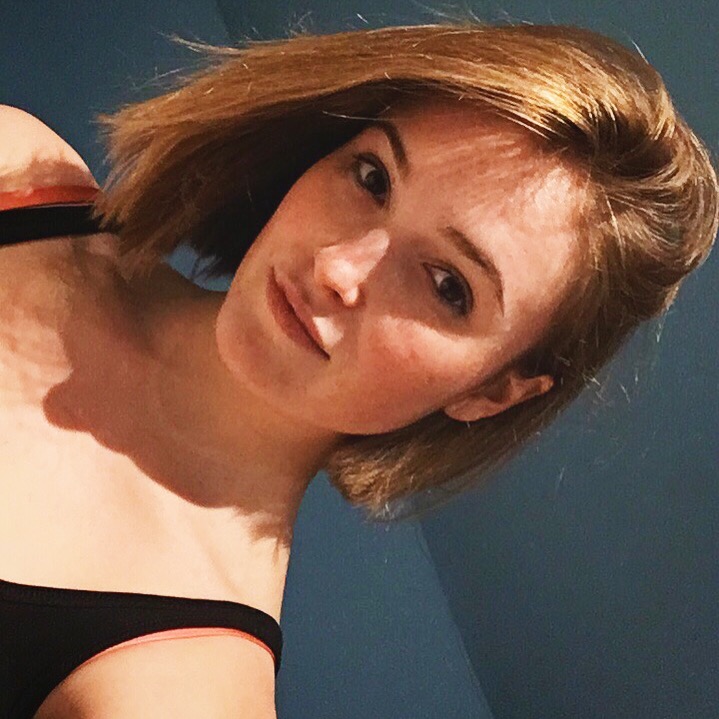 I admit, I cried because I couldn’t get a good selfie… I put this down to the shock.

I now have short hair, and I look like a totally different person. Some say I look like a child, like Matilda (as in the musical); others have said I look older, like a 40 year old woman… so that’s great. I’ve also had so many positive comments and, after a mini breakdown when I initially saw it, it is now growing on me. I love the freedom of it, my drying time has now lowered to a record five minutes, previously unheard of. I save money on shampoo and conditioner, and I don’t have to work any volume into it. 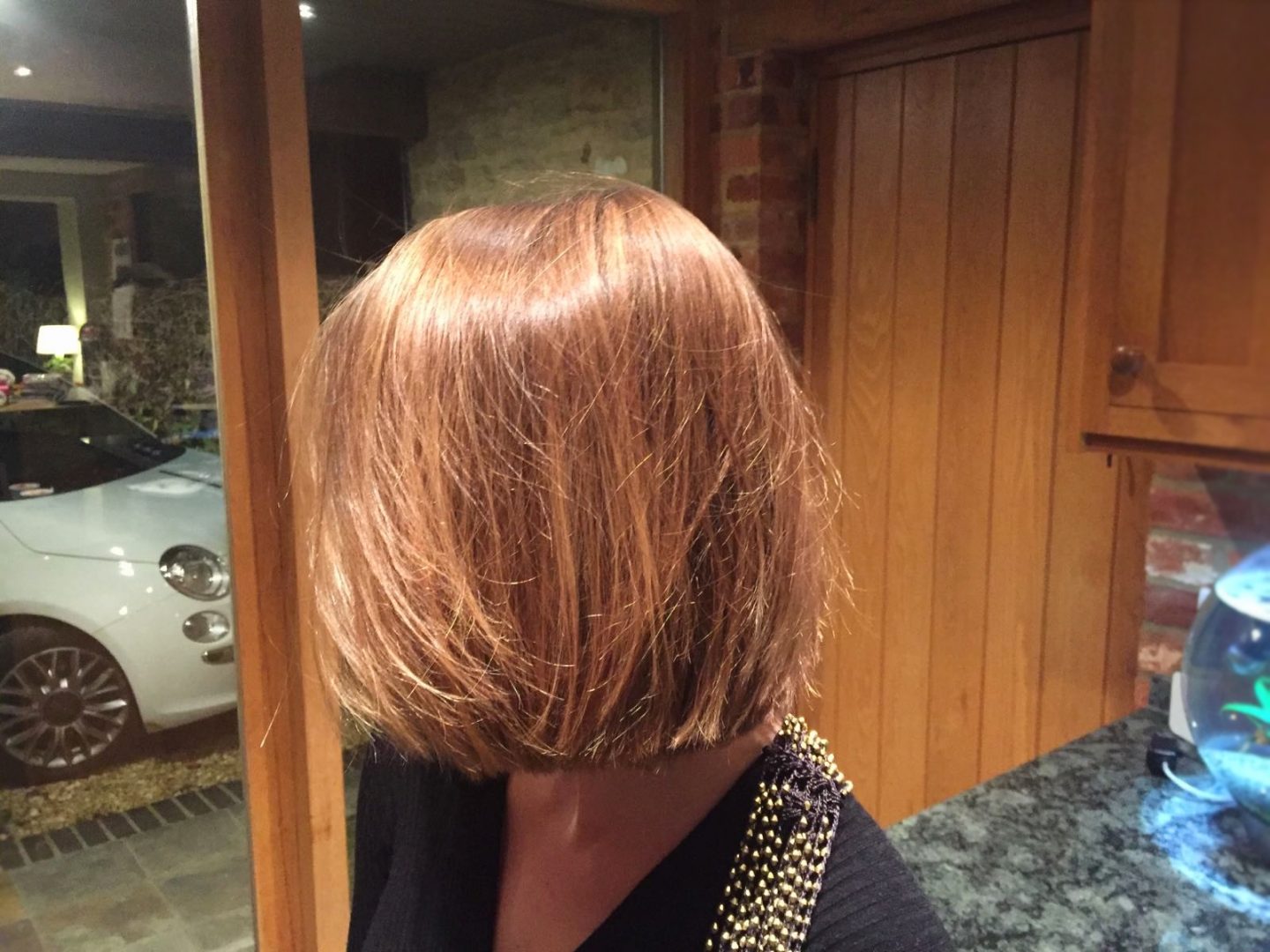 I also haven’t taken my scarf off due to a cold neck, am realising the whirlwind that comes with short hair in the wind and am no longer able to play at knots. I can, however, practice an adapted form of twiddling, so all is not lost! 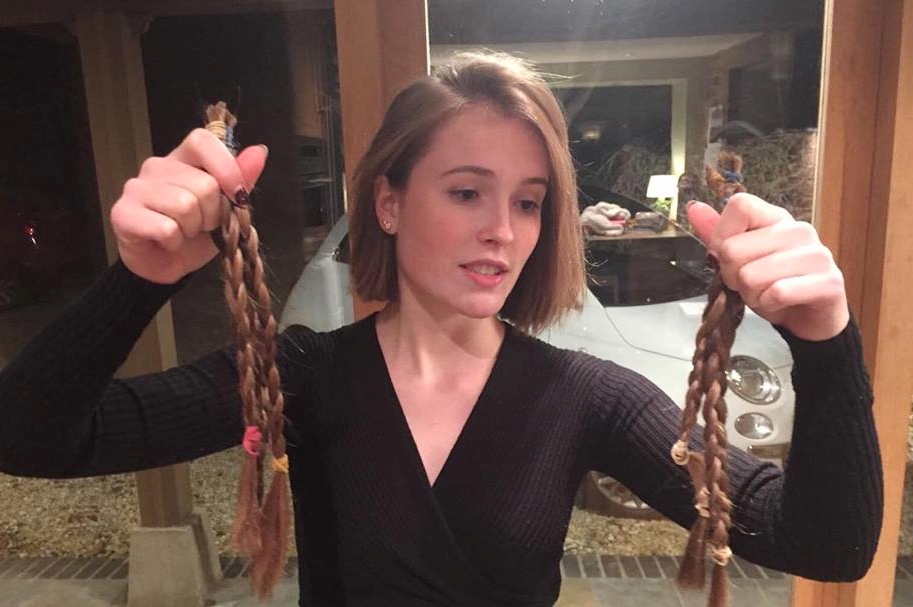 The actual cut was bizarre and I went into some kind of shock I think. I couldn’t stop laughing as my lovely hairdresser cut the plaits off one by one and laid them out on the vibrantly pink envelope. 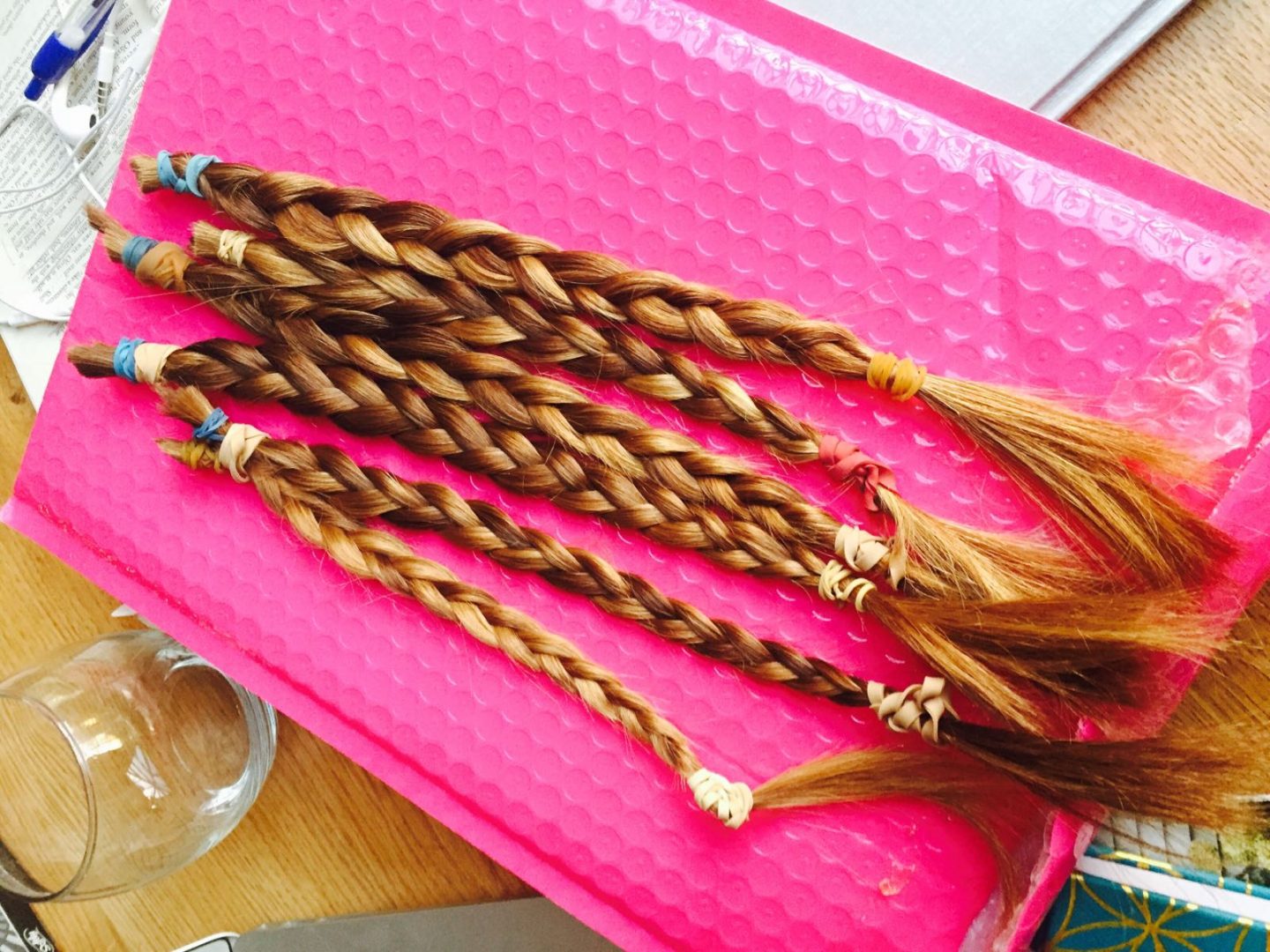 My brother filmed the whole thing and you can view that here… I thank my mother for her golden comedy throughout. When the plaits were all off I wasn’t sure what to make of them, they were a  bit creepy really- not a part of me anymore I suppose, and, therefore, were a bit alien. And then I packaged them up and sent them off. Definitely the weirdest thing I’ve ever put in an envelope. 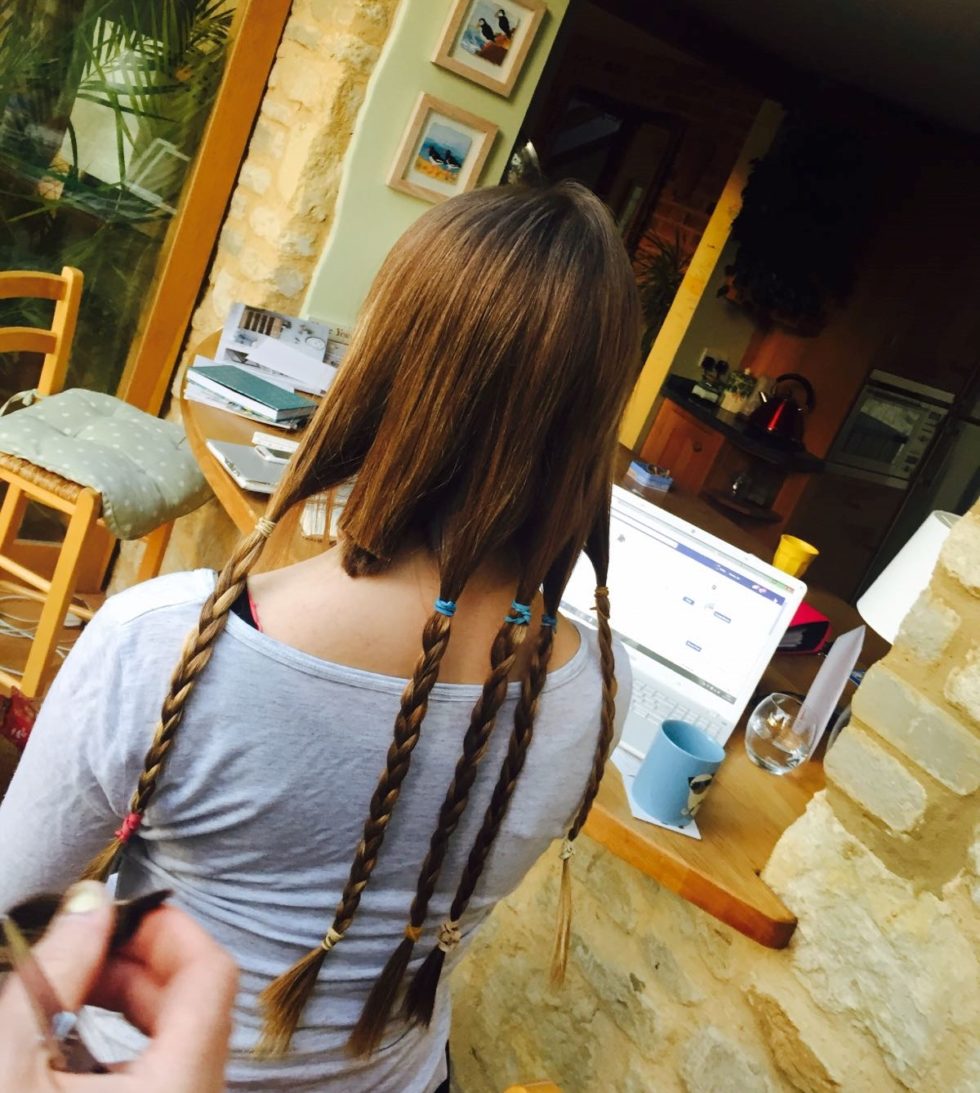 So, the whole thing has been liberating. I don’t know if I’ll keep it short for while, maybe I will. Eventually I’ll grow it back out, cut it off and donate it all over again. I would love to reiterate how grateful I am for the donations I’ve received, its extraordinary and touching. The Little Princess Trust really deserve it all. It would be amazing if I could get that last £50 to reach £1000! It’s not too late to donate, and you can do so here. I will also take this opportunity to preach how easy the whole thing is, how exciting! If the thought of donating your hair ever crossed your mind before, or is now… take this as evidence for the positivity of such an experience! 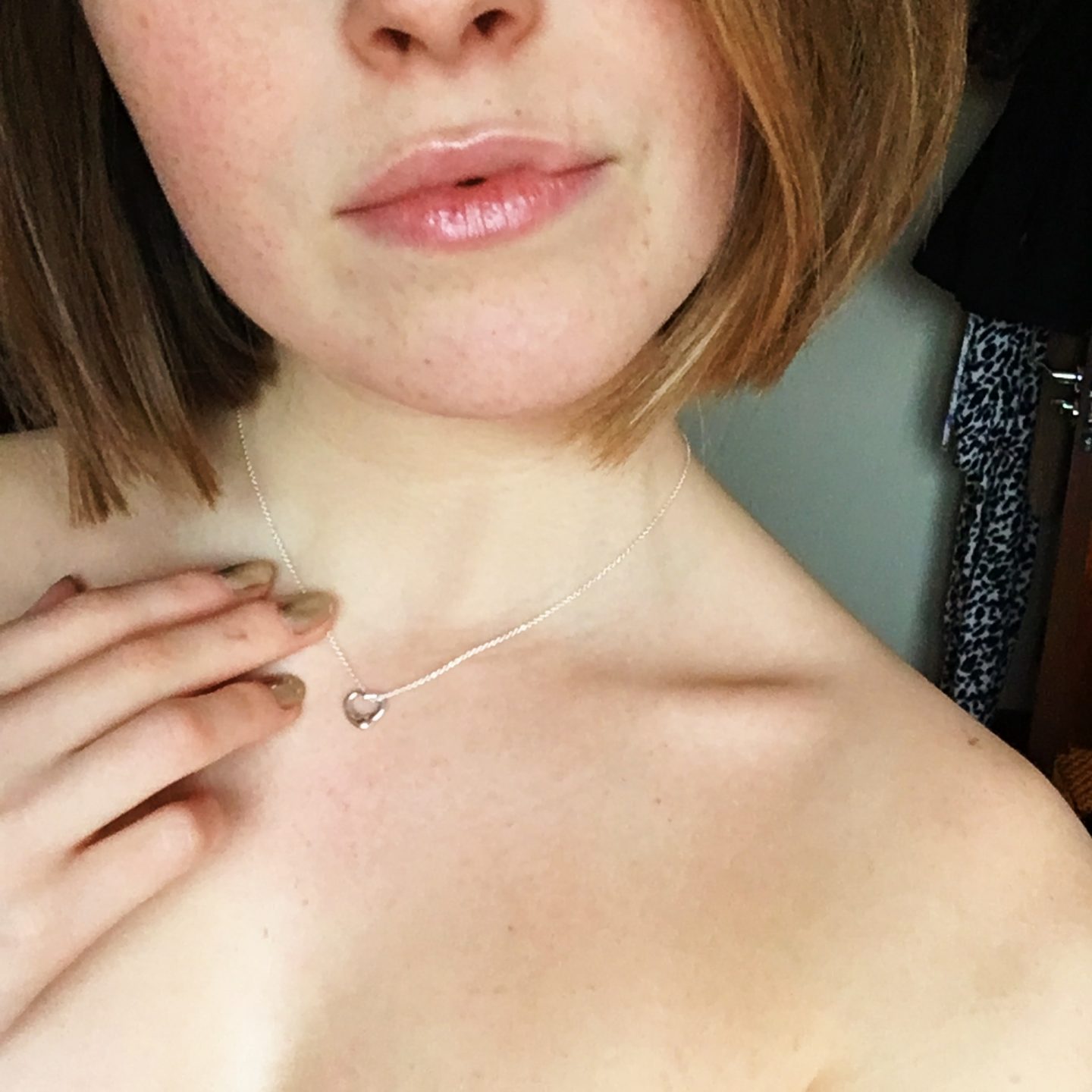 Go ahead and donate your locks… New Year, new you and all that! You can find guidelines on the process here.